Capturing The Birds for Alfred Hitchcock

When shooting began on Alfred Hitchcock's 1963 film, The Birds, a horror/thriller loosely based on the story by Daphne du Mauriere and influenced by an incident that happened in 1961 in the town of Capitola, California, there was much anticipation about this follow up to Psycho. The film celebrates its 54th anniversary next week and was well received by critics upon its release.

"His relationship with Hitchcock was very, very special because Hitchcock deliberately asked for him to come up to where the crew was on location. It was his big break, the first time that a director ever asked to work with him directly."-Lillian Michelson

"I got to meet Hitchcock and I learned a hell of a lot. I learned a tremendous amount from this man who, to me, is cinema. I worked on The Birds at Universal and then Marnie."

“What I learned through Bob [Boyle, art director and production designer], from Hitch, was the objective-subjective way of shooting a picture. Hitchcock's been noted for suspense, but this is one of his weapons that helped create this suspense in his films. For example in The Birds, when Melanie was sitting on a bench and the jungle gym was behind her and the birds started forming, the angle was from the point of view of the birds and then back to her but closer, the point of view of the birds and closer until...smack! We had the shock of the terror that was behind her. I learned this, and I tried to use it in other times that I did a storyboard. I started looking at other pictures that he did and saw how he would do a lot of his picture without dialogue, cutting from image to image, and building up in the audience a tremendous amount of suspense.” 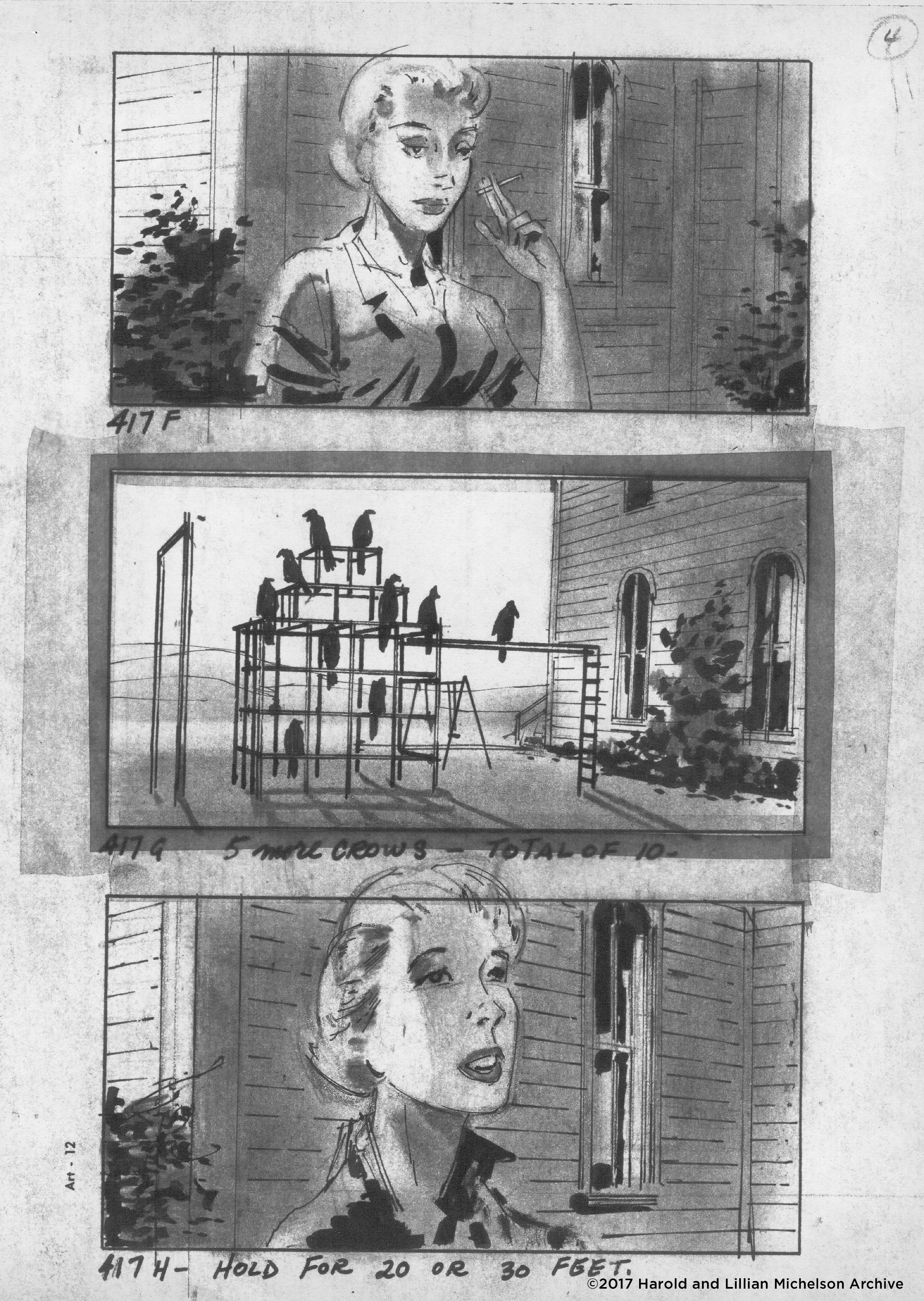 "When I was given the script to The Birds, and I had read it, I couldn't quite make up my mind whether it was good or not, but I felt that the script itself, the words themselves, had to be enhanced by a lot of images. I did little compositions and many of my sketches were accepted by Hitchcock and actually were shot that way. There was one time I did a series and I brought them to Hitch. He looked at it, and he said, ‘This is really very good, but I can't use it here.’ And I said, ‘Why?’ I was boiling inside because it really was terrific. He said that this is not the right place to put these sketches, and to me it was a rejection, until I woke up to the fact that he was absolutely right. It was in the wrong place because it would have been anticlimactic, and Hitchcock's pictures aren't anticlimactic. A picture is like a symphony, is like music. It builds up. It goes down. If you’re the composer, you have complete control over the music and the emotions that it gives forth. In this case, he was absolutely right.”

"When I read about the scene when the attendant was hit by a bird......and gasoline started to flow down the street. I just drew it that way. Cut back to Melanie who sees the stream coming down, and a whip pan to where it was coming from. As she turns back to the car park to see where it's going to, there's a man standing by this car, ready to light his cigar. It was very obvious to me that these were the scenes; there was no talking. And it worked." 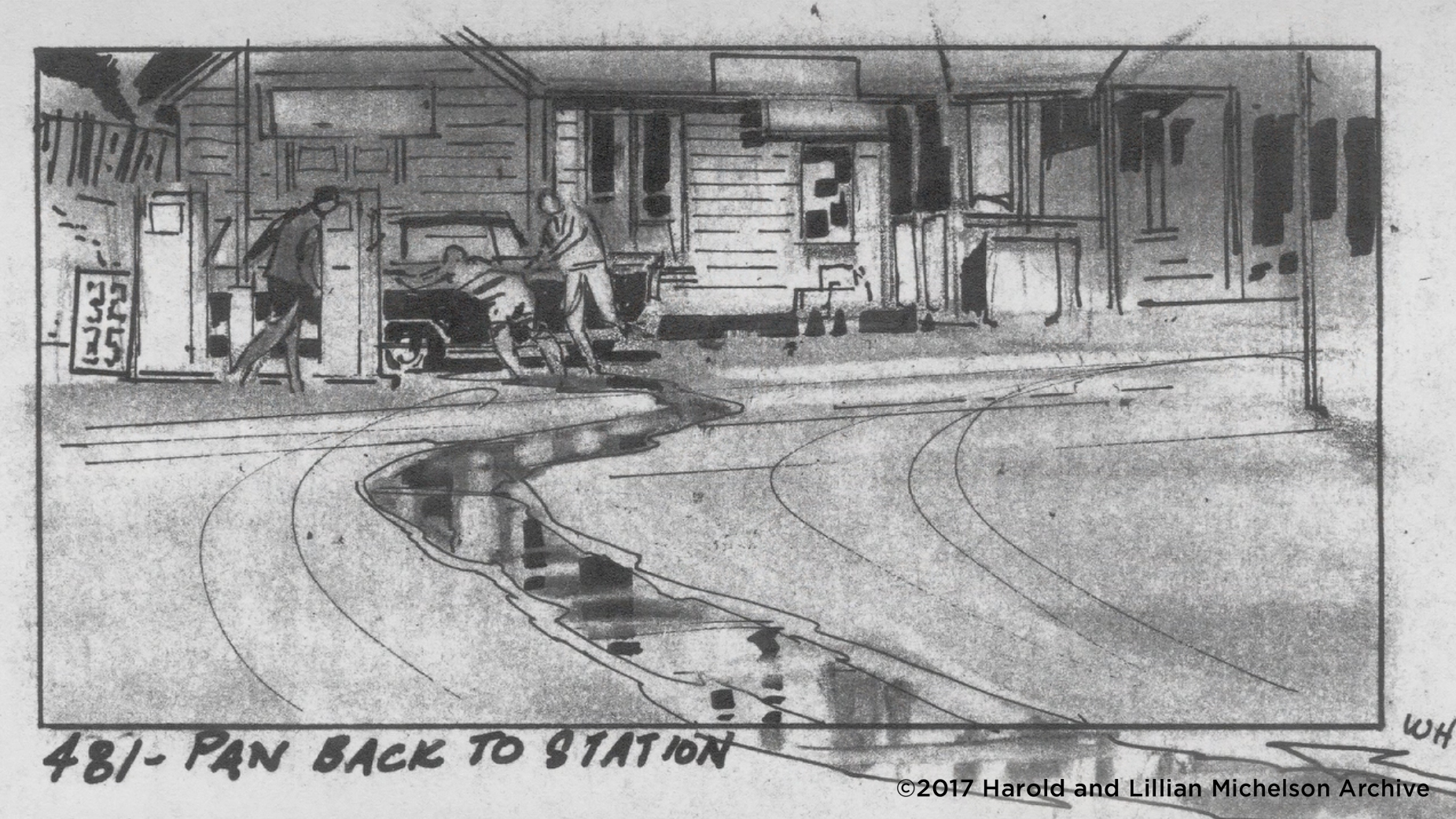 “Hitchcock would put them [storyboard scenes] up in slides and he would show them on a screen and the editor, George Tomasini, and Hitch and myself were in this room, and he would see these individual shots of terror, like quick cuts of absolute terror, with blood running down and her screaming and everything. He would say to the editor, ‘Twelve frames,’ and the editor would take it down a foot of film or whatever, and he actually sat there in the screening room and edited this whole sequence. It was quite amazing to watch this because timing is another area that I know nothing about. I do make a good composition, but as far as how long to keep it on the screen is way beyond me.”

"A lot of the indications for how an action scene would be done would appear in the storyboards, not in the script. The Hitchcock script was a pretty simple thing, and because it was him, he didn't have to have every shot described and so on. It was just important for Hitchcock to have a group of totally copacetic people that he could talk to, spitball with, play jokes on, infuriate. But they loved him. They understood his eccentricities, and they were just totally the ideal team for him to have had. The ones they did together were Marnie and The Birds, and there are no two more beautiful films than that, and these are the guys that did it."

Harold and Lillian: A Hollywood Love Story opens on April 28, 2017 at the Quad Cinema in New York City and on May 12, 2017 at the Laemmle's in Los Angeles with more cities planned. Sign up for our email newsletter to learn when the film is available in your area.